I was taught to crochet & knit as a child by my Grandmother, she also made sure that I was able to follow and replicate patterns. I didn’t really enjoy the hobby when I was young, there was always something better to do…

…But, I came back to the craft in 2013 to give myself a break from internet job searches. I had spent a couple of years prior to that recovering from a CFS/ME collapse at work and was finding it increasingly difficult to get employment.

During the first few months I made a promise to myself that I would practice every day and become proficient enough that I would someday teach others to crochet. I achieved that goal by opening Unravel & Unwind in March 2014.

It was at this time that I met Helen from Rainbow Valley Crochet. I needed someone to teach me advanced skills as I had quickly outgrown the beginner patterns and I wanted new challenges.

As a result of Helen’s mentoring, advanced techniques and unique pattern constructions I have been able to expand my knowledge base much farther than my Grandmother thought possible. She now tells me that “the student has surpassed her tutor”, and I am proud to say that with Helen’s faith in my ability and my Grandmothers encouragement I became a designer this year, 2017. 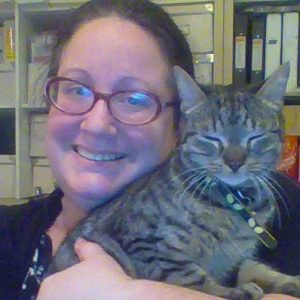 I, too, crochet.  I picked up a hook at a very young age and promptly dropped it, only to pick it up again decades later in about 2010.  It was one of many crafty obsessions I had.  I’m also into papercrafts in a big way and I have been known to cross-stitch.

I had a go at teaching in 2013 and had mixed results out of my first class of four, and now I much prefer assisting Faye and getting on with my own varied work.

I am available for commission work if you don’t crochet yourself and would like something made.

I can be found at Unravel & Unwind on Mondays, Tuesdays and Thursdays from 10 – 2, and on Fridays 12 – 2.  Any questions about commissions, trouble with patterns, etc, can be asked by e-mail to sy@happyaccidentstudios.co.uk .